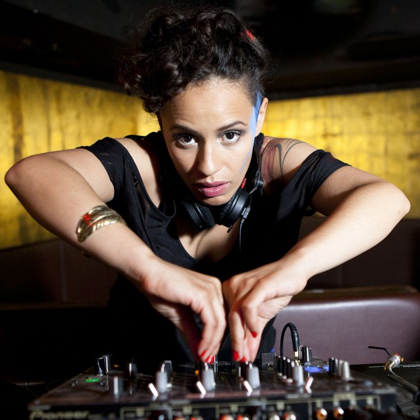 Joyce Muniz is a Vienna-based, Brazilian Dj, vocalist and producer, who is currently one of the leaders of a new undefined musical style which fuses European club sounds with tropical rhythmic influences from Brazil, South America, Africa and the Carribbean, while built on a solid foundation of percussion and heavy bass.

Born in 1983 in Sao Paulo, Joyce Muniz arrived in Vienna during the mid nineties and was soon introduced to the vibrant Viennese electronic music scene. Short after her first DJ gig at the tender age of 16, she began collaborating as a vocalist with Markus Dohelsky aka Shanti Roots (Vienna Scientists) and I-Wolf (Sofa Surfers/Klein Records). In 2006, Muniz teamed up with Stereotyp and created the first Funk Mundial 12” “Uepa/Jece Valadao” (Man Recordings) and Ku bo Ep 1 and 2. In 2007, she and Shanti Roots started producing under the name of Monte Laa Prod and released their first 12”.

In 2008 she contributed her vocals to the Cusmos (Herwig Kusatz ad Karl Möestls) track “Garoto,” which is was released on the Kruder & Dorfmeister label G-stone. Joyce Muniz also did some collaboration with Flore, Buscemi and Skero. Her first solo release „Party Over Here“ debuted November 2010 on Shir Khan’s well known label Exploited and received massive DJ support throughout Europe. DJ Mag has hailed it „the electro single of the month“.

Joyce Muniz is featured as a singer on the current Munk Album “The Beat and the Bird” out on Gomma, remixed the classic house anthem “Lovely Daee” by Blaze out on Defected and just scored No.4 in the Deephouse Beatport-Charts with her “Malicia”-Single.

“Pulp Fiction” is her 3rd release on the Berlin label Exploited. With “Pulp Fiction” Joyce shows the variety of her production and music taste. For Example: Louie Austen meets Joyce Muniz: a definite must hear. The perfect mix between Sinatra, Barry White and Leonard Cohen on Joyce’s melodic house steroids. In “New in Town” Joyce teams up with Sketch who was already featured on her Top4 Deephouse-Beatport-single “Malicia”. “Pray for Peace” is pure tropical future afro house while “Back Down” is jacking house in the sense of Sneak but with those melancholic Julio Bashmore moments.

“Messing With My Mind“ Ep (part 1 and part 2) were released to the top of the Beatport charts in March and June 2012. It features a Joyce Muniz exclusive remix of the MFiddler track “When the Morning Comes“.

In addition to her DJing and production work, Joyce earned an Amadeus (Austrian equivalent to a Grammy) for her vocal work with Austrian rapper Skero on the hit single „Kabininparty“, which won the „Best Song of the Year“ award, as well as 2 other nominations.