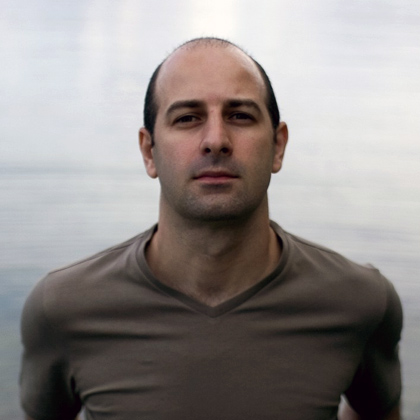 Olivier Raymond, born in 1971 in Grenoble (France), got into “black music” (disco & funk) already in his early teens. During college years, Olivier’s friendship with Stéphane Deschezeaux, kick started a musical journey, with a debut on a local radio station broadcasting a show dedicated to Funk … hence, only being 15 years of age, Olivier had started mixing. Olivier’s mixes were influenced by a large spectrum of music styles: electro-funk (Afrika Bambaata…), italo-disco, new-wave (Depeche Mode, New Order… ) and the early Chicago and New-York house scene.

By 1991, Stephane and Olivier bought their first bits of equipment and started to compose music. Not too long after that, Olivier became a resident dj at a club in Grenoble, jump starting a career in electronic music! It was by 1994, that the experiments of Stephane and Olivier became official. Their live act ‘Oxia’ was born. In 1995, Olivier and Stéphane met Michel Amato (The Hacker), Alex Reynaud and Kiko in Grenoble, the electronic-tuned city of France. That same year Olivier created Ozone records together with Kiko, where Oxia released the first EP (influenced by the American techno sound à la Jeff Mills, Robert Hood and Damon Wild). On that same stamp, Olivier also co-produced the first releases of Jack de Marseille.

Olivier never rested and went on to create a new label with Michel Amato aka The Hacker and Alexandre Reynaud in 1998. They baptized it ‘Goodlife’ in homage to the mythical Inner City track. Olivier and Stéphane still produced several EP’s together and by the end of the century they decided to part paths (as good friends) and Olivier continued with Oxia as solo DJ act.

Oxia’s continued sound evolution gave birth to a series of EP’s & remixes on Goodlife but also on labels such as Intec, Terminal M, … leading to a worldwide dj diary. The excelling dj qualities were captured in several mix cds, and that’s not all. A page still unfolding, Oxia released his debut solo album ‘24 HEURES’ on Goodlife in 2004 that floats between groovy melodic techno and a deeper electro touch. Besides the major international press attention, ’24 Heures’ reached he n°5 in the category ‘best album’ by the readers of Trax magazine.

After an extended period of touring, Oxia returned with some A class releases & remixes in 2006. ‘Domino’, on the German Kompakt stamp, became a worldwide hit played by every DJ you can think of. More Oxia releases for the English Tsuba stamp (collaboration with Eric Borgo), Confused (collaboration with Gino’s) and another banger on Kompakt (‘Not Sure’). The new release on his Goodlife stamp (‘Lost Memory’) finally came in December 2007. The icing on the cake came in 2008 when Oxia got voted in second & third spot in the Beatport Music Awards ‘Best Remix’ (Oxia remix for Butch ‘On the line’) and Best Techno Artist.

The list of remix requests got longer and longer. As you can imagine, this contributed to a busy dj schedule which even got more intense by the vibrant dj battle done with his good friend Agoria.

In 2009 Oxia did not shy from releasing some more fine material. In October the ‘Sun Step’ EP was released on 8Bit record reaching immediately top rates in charts like Beatport, Resident Advisor, etc. He mixed the fifth anniversary compilation of Systematic (a selection of tracks exclusive to the Systematic compilation), including a previously unreleased track (‘Trying Out’) produced with his friend Nicolas Masseyeff.

2010: With Nicolas Masseyeff, a new release on Tsuba, ‘Keep the drums’, got released. Furthermore Oxia also remixed one of Nicolas’ tracks. For his long-time friend Agoria, Oxia delivered ‘Less time’ (Infiné Music) and with Eric Borgo he did another ep for 8Bit (‘Plastic Bed’).

2011 saw Oxia mixing another b-day compilation. This time he made a selection from the 8Bit cataloque for their 5th anniversary. On this mix you can also find a previous unreleased track of Oxia (‘Meaningful’). Soma wanted to have Oxia on the bill for their 20th anniversary so he contributed his interpretation of the ‘Human’ track by Slam. But most importantly Oxia has finished his forthcoming 2nd solo album, it will release on InFiné Music in May 2012.

After so many years in the game, Oxia is still at the forefront of the international electronic scene, never losing sight of all influences he had along the way and keeping one strong element in his music, and that is groove!