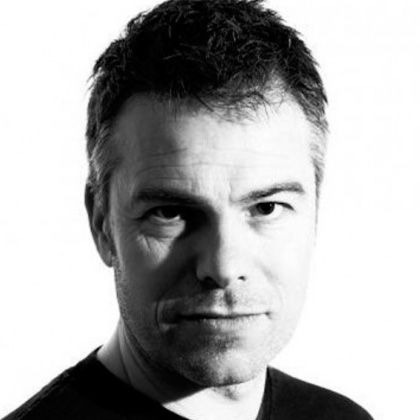 „I started djing in 1985 playing Hip-Hop / Soul and mixed my way into the UK DMC mixing championships in 1988. That same year I joined a Hip- Hop group called „Sylk Kut“ and played a mini tour with De La Soul & Sugar Bear. By the end of 1988 I started buying House & Acid House. By 1992/93 I got into Techno after going to a „Lost“ party in South London. This was a major turning point for me musically. In 1994 I co-ran a weekly club night in London’s Leicester Square called „Iconelastic“ and in the same year I had a weekly radio show on London’s infamous „Chillin‘ FM 102.9. I have also been a guest on various other radio shows, including netmix.com / dj-sets.com and Energia 97 in Sao Paulo. In 1997 I hooked up with DJ Rush after he heard a mix tape of mine. Rush got me a gig at Berlin’s Love Parade and various other gigs in Germany that year. 1997 was also the year I invested in buying my first pieces of studio equipment. By 1998 I had released my first couple of EP’s on Rush’s „Kne’Deep“ label & on „Off the wall“. Following on from this I released on Justin Berkovi’s „Predicaments“ label as a split EP with Rush. I have now released over 35 EPs on other labels such as High Octane / 4 X 4 / Tonewrecker / Audio Textures / Dark House Music / Morpheus / Thrill / Psycho Shoxx / E’pochworx. In the last few years I have worked with Jamie Bissmire (Space djz) & DJ Bam Bam on both their „50hz“ & „Bass Heavy music“ labels. I started my JACKSTAR label in 2001 because I thought with the loss of UC and Jasper Stone records there was still a need for a new edge to that „Chicago hard funk music“. As a result I got in touch with DJ Bam Bam and we put together the first release. The label has gone from strength to strength with artists from DJ Rush / Sandy Warez / Switchblade / DJ MH / DJ Bam Bam / Jamie Bissmire / DJ Kamikaze / Boris S / Sebastian Prelar / DJ Urban / Space DJZ and of course myself. My djing has kept me very busy over the years and taken me all over the world from Belgium / Germany / Slovenia / USA / Brazil / Austria / Sweden / France / Israel / Holland / Japan / Poland / UK and many more. DJ Rush named myself as his favourite DJ in iDJ magazine in 2005. I am now with Frank Kvittas Enhanced Music bookings and have been touring all over Europe with Frank, Boris S, DJ Bold & Patrick DSP. In 2010 I have many more new projects lined up, including most of the summer festivals all over Europe and releases on Kne’ Deep & Bullshit as well as my Jackstar label.“